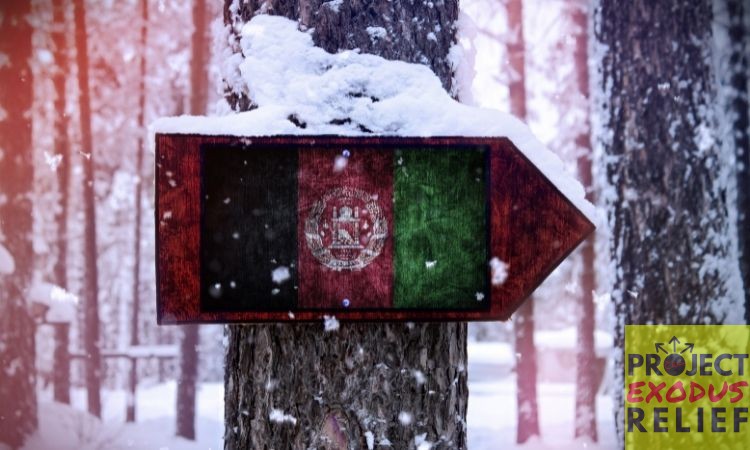 We are still trying to reconcile the fall of Afghanistan to the Taliban and are attempting to grapple the disastrous aftermath of this new regime’s cruel rule. Afghan nationals and American citizens still send us their cries for help to be evacuated from the country. But in the meantime, more hurdles are piling up high in front of us. We have hunger, lack of education, abuse, crime, terror, insecurity, and I could go on. And it gets worse. To top it all off, winters in Afghanistan are dangerous and we have the brutally cold winter coming. Let us share with you how Project Exodus Relief is stepping up to the plate.

Winters in Afghanistan are chilly, with an average temperature of 30 degrees Fahrenheit in January, frequently with freezing nights, and with probable temperatures of -4 to -13 degrees Fahrenheit. Snowfalls are common and sometimes heavy throughout the country. Kabul, Afghanistan’s capital, is about 6000 feet above sea level. Therefore, it gets somewhat moderate winters, but other areas can be quite concerning. In the winter, there are periodic dust storms and strong cold northern winds. The northern province is bitterly cold around this time (November), with nighttime lows of -10 degrees F. However, before March, it will be significantly colder.

A Conflicting Need during Winter in Afghanistan

Locals have an urgent need for colder winters in Afghanistan, but they can also be detrimental. Let me explain. See, droughts have been a regular occurrence in Afghanistan since the 1990s. Afghanistan produces very little food and with incredibly high amounts of checkpoints and Taliban-controlled borders, they have made imports and exports extremely difficult. Afghanistan’s winter snow is desperately needed because knowing how much snow there is in the mountains might give you an idea of how much water will be available for crops in the coming summer.

In October, the snowfall season begins in the mountain regions and it typically lasts until the month of April. Interestingly enough, in winter, precipitation is at its peak. It falls as snow, often blocking mountain passes. This can be a big issue when it comes to moving people to get back to their hometowns after getting displaced during the chaos in Kabul, when the entire country, it seemed, descended upon the capital’s airport. It also presents a problem when we are trying to move people to get them on evacuation flights.

According to the United Nations, about 3.5 million people have been internally displaced as a result of war. It’s a devastating thing to see. It is also no way to live for these families. We must do what we can to help them. As winter approaches, around 500,000 of them are crammed into tent cities in Kabul’s parks, living without running water or power. To put things into perspective, temperatures in the capital of Kabul can drop to as low as 22 degrees Fahrenheit.

Without suitable winter clothes and heating, more than 300,000 children in war-torn Afghanistan endure cold winter conditions that can lead to disease, death or worse, the selling of their bodies for human trafficking or child marriage to help the rest of the family survive. These are big numbers. Additionally, the city’s medical facilities aren’t equipped to handle the number of people who have died as a result of the terrible weather.

Winters in Kabul bring more than just hunger and cold; they also bring a level of pollution and soot that settles on the skin after prolonged exposure, and which, as always, is deadly for many. People will struggle to feed themselves and keep themselves warm as fuel prices rise. The cost of power is rising every day. Individuals are unable to acquire wood or other winter requirements.

They have a hard time finding cooking fuel, so families remain warm and cook on open fires by igniting the trash and waste in their immediate vicinity. The majority of Afghans do not have central heating in their houses. They rely instead on an old-fashioned heating device called a wood burner to keep their homes warm in the mountainous country.

Even Schools Are Affected By Winter

Winters are so cold that even schools close for long periods of time. In the coldest districts of Afghanistan, where temperatures can drop below -16 degrees Fahrenheit, schools remain shuttered until March. Children get no education for months out of the year.

“The most vulnerable children are those whose schools have shut because of the worsening winter conditions,” he said. “Their families don’t have the money to buy winter clothing. Instead children are forced to huddle at home to escape the bitter cold.” (source)

As winter in Afghanistan approaches and access to isolated, snow-bound places is shut off, the window for providing humanitarian assistance to millions of vulnerable Afghans is closing a lot faster than we would like. The Taliban is displacing various people from their home provinces as the cold gets colder. We suspect that this is to make room for their own militias.

Will you become a part of our Project Exodus Relief team and help us give people hope? With your donations, we can do so much. We can provide them with warm blankets, kindling, fuel and oil, as well as food, water and even doctor’s visits if they get sick. As we struggle to keep them safe and alive, we are also working hard at procuring flights to evacuate those in the gravest of dangers. Please consider helping us.

You can truly make a difference in the lives of those in Afghanistan suffering beyond anything that we have ever had to endure ourselves. Let’s show them that they are not alone; that we will help them survive the winter and that they don’t have to sell their children or join the Taliban out of desperation. Join us. SHARE THIS LIST OF HUMANITARIAN GROUPS AND INDIVIDUALS THAT ARE ALSO HELPING WITH THESE EFFORTS.