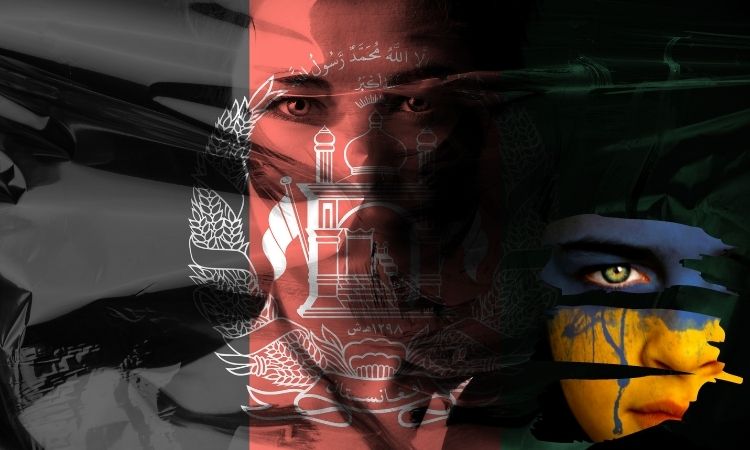 The situation in Afghanistan is much worse than Ukraine for many reasons. Not only has it been going on longer, but the situation is more dire as well. If you think about it, Ukraine is in a conflict that has been in the works for 8 years but really kicked off about a month ago, food supplies were not in short supply. It’s the bread basket of the world. The economy was not excessively stressed and the borders are open on all sides for people to flee.

Ukrainians are being accepted with open arms into any neighboring country. The US government and almost every European country are funding and supporting these refugees including paying for them to be evacuated across the world. Ukraine gets 24 hour a day, 7 days per week media coverage on every media outlet.

Every US politician is wearing a Ukrainian flag lapel pin, people are ostracized for not changing their social media profile image to the flag of Ukraine. The US government allocated over 13.6 billion dollars to
relief in Ukraine. Most NATO countries are sending weapons, ammunition and military equipment to assist Ukraine as well.

Now let’s look at Afghanistan-
The US pulled out of a war that in my opinion we needed to be done with.

But we went about it choosing the worst possible option for every single decision. The USG gave a list of our allies to our enemy to ensure they were systematically destroyed or tortured, we removed their entire economy (the US Military) without a thought of setting them up for success beforehand. We then seized 9 billion in assets to “keep the money out of the hands of the Taliban.”

We then after the fact decided to evacuate our AMCITS which led to the US directly funding the Taliban by paying enormous bribes, and negotiating with the Taliban since we are now in a position of weakness. On top of that, we left 84 billion dollars worth of the newest military equipment to be used and sold by the Taliban.

Meanwhile, the media coverage of the situation was minimal, with only occasional reports by some conservative media outlets. This just frames the situation for what has become possibly the worst humanitarian crisis in recent history. Now… realize that Afghanistan can’t import food at all because they don’t have the money, they can’t earn money on exports because the Taliban have closed the borders.

Targets for the Taliban to Kill on Sight

The best and brightest in Afghanistan can’t work because they were previously employed by the US or NATO and are now on the target list. On top of that Afghanistan has some of the harshest winters on earth due to the average elevation in the country being above 6,000ft. The 308 million dollars the US provided for relief in Afghanistan has yet to be seen.

Now, you have a country with extremely harsh winters, with no economy, closed borders and almost no internal food supply. To make matters worse, the US is pressuring countries not to accept refugees from Afghanistan. They are funding border security in neighboring countries to stop refugee traffic.

This situation is the absolute worst case scenario and literally “Hell on Earth.” Afghanistan’s only hope has been the veteran-run ad hoc evacuation groups. These are groups like Project Exodus Relief, and the 18 other groups under the Moral Compass Federation.

Why is Afghanistan not getting the same attention as Ukraine?

That’s a good question. It’s hard to say for sure, but I do know that Ukraine is one of the most corrupt countries on the planet. Back in late September or early October, I spent 6 hours in the middle of the night on a call with 2 Ukrainian parliament whistleblowers. These whistleblowers reached out to us. They were aware of 40 million dollars being sent to Ukraine for Afghan refugees. They said that the president Volodymyr Zelenskyy was taking all of the money for himself.

We know that President Biden and his son have made millions off of shady deals in Ukraine. Same as have Mitt Romney, Nancy Pelosi, John Kerry and others. It could be possible that they are spending billions in taxpayer funding to protect their personal interests in this criminal Disneyland called Ukraine.

In contrast, the US government sold all of Afghanistan’s natural resources to China. This is including 1 trillion in lithium; a deal that lined the pockets of US politicians while undercutting any chance of prosperity for Afghanistan. This is only the tip of the iceberg. The criminal activities that have been committed by US politicians Republican and Democrat during the occupation of Afghanistan run deep.

During the fall of Kabul, the US evacuated all of the rich Afghan politicians, who were involved in selling their country out. They had become rich because of it. Then, everyone else who was not involved but knew of these illegal acts were left to perish.

Why do you care so much about evacuating Afghan SOF?

For starters I worked with them and know many of them personally as do the rest of our team. They are the most vetted, having had intensive background checks, and polygraphs. They are the ones who were loyal to us more than anyone over the past 2 decades of war.

Then think about this, these are the people who helped us evacuate our AMCITS, and LPR’s. They have remained loyal until this day even knowing that it appears the USG cares nothing about them. Here is something else no one really thinks about.

These guys are our only hope of keeping terrorism at bay in the region. As a former Special operations guy, I know from personal experience it is very hard. In some places, it’s impossible for non-Afghans to blend in. We can drive around and get by but it requires locals to have access into most places. The country is so tribal that even Afghans can’t reliably travel in places they are not from even within Afghanistan.

Is “Over the Horizon” a Reality?

They are also our only hope for this “Over the Horizon” strike capability we are told we have. Yes, we have predator drones that barely have the legs to make it to Afghanistan now. But even then we won’t have the eyes and ears on the ground to actually know what to strike!

So, our drones barely have any station time when they get to Afghanistan. Then, we don’t have the intel network to find and fix the targets without these very special warriors. Terrorism is set up for a comeback like you can’t imagine. So, it is imperative that we evacuate these Afghan SOF before it is too late.

If we wait too long, the groups like those in the Moral Compass Federation will run out of money to support them. They will have no other choice, but to join the enemy just to keep their families alive. If this happens it will be the western world’s worst nightmare.

Imagine having the best trained soldiers, some of them Ranger school and Special Forces “Green Beret” trained. This means they are trained to create more men like themselves as force multipliers. Now the Taliban are equipped better than most armies in the world. This is the absolute worst possible outcome. We must act before it is too late and that time is drawing near and fast!

How many of these Afghan SOF need to be evacuated?

If we were to evacuate all of the SOF on the rolls of the MCF, including their family members, that would be roughly 25K people and would be one of the greatest investments we could make for the future of our country. In contrast, the US is already talking about evacuating 100K Ukrainians, who have not been vetted in any way, and don’t provide any strategic value to the US.

Not to mention almost every country in the world is wanting to take them in, while our Afghan Allies are in a much, much worse situation and the US has actually told everyone not to accept these people. Think about that for a minute, our government has pressured every country we have talked to, not to take any Afghan SOF!

Many countries have agreed to take these guys but are afraid to piss off the USG… so they say. For guys like me, this decision is a “no brainer.” We should, by all means, assist the people of Ukraine, but only after we finish the job in Afghanistan. As the world’s largest superpower that waged war in over a hundred countries
simultaneously including, Iraq, Afghanistan, Yemen, Somalia, Djibouti, Syria, Libya, the Philippines to name a few, you would think we could multitask relief efforts with priority on the catastrophe we caused in Afghanistan.

Written by Mike Edwards, founder of Project Exodus Relief and co-founder of the Moral Compass Federation