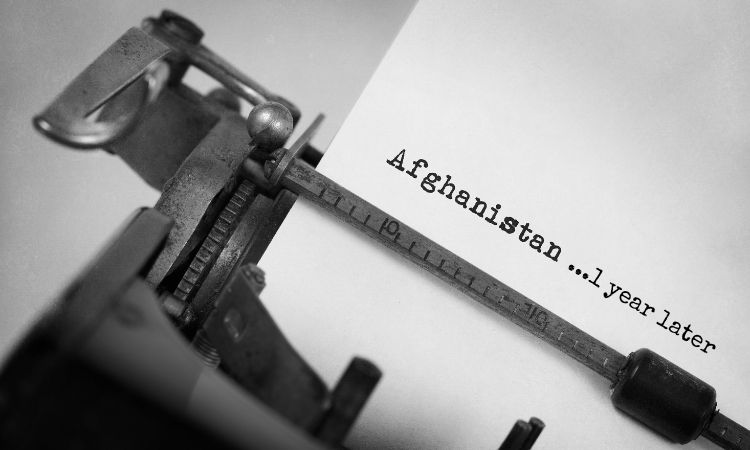 The other morning, I woke up to a beautiful sunshine-filled day, but I was heavy-hearted. My calendar reminded me that exactly one year ago, to the day, was the anniversary of the United States’ withdrawal from Afghanistan.

My history of involvement started on 15 August 2021. I received a phone call from my civilian business client who is of Afghan descent. We had gotten to know each other over the years and when we were not speaking of business matters, we engaged in practical discussions about world events. However, we were not close, but cordial and I had respect for his professionalism.

The phone call changed all of that.

He was in a panic. He had been trying since the announcement in April 2021 to get 19 members of his family out of Afghanistan but could not get a return call or email from anyone in the State Department, or US Congress.

The male relatives in his family were high-value targets of the Taliban because of their role in the Afghan government. They would most certainly be on a Taliban capture and kill list. He was desperate. He knew of my prior Special Forces (Green Beret) background and asked if I had any ideas.

I started calling everyone I knew in and out of the Special Forces, Special Operations Community, and the Federal Government. I found everyone that I initially spoke with in the veteran community were also in some form trying to rescue Afghan families or USA trained (and vetted) Special Operations Soldiers. But, like my resource, they, too, had no luck getting anyone in the USA government to assist.

Aid arrives, but is quickly fleeting…

Ironically, that coming weekend, I was to receive a Veteran’s Award at a dinner of 500 people that included US Senators, US Congressmen, etc. I asked if my acceptance speech that evening could be an appeal for assistance to the audience.

After my short speech, I was initially aided by two US Congressmen and a handful of donors, but that faded quickly, and my Afghan family and the others remained trapped in Afghanistan with no hope of flights or land routes out.

Also, during this time, I was asked to informally join other US Veteran lead Afghan rescue operations (most seen in the cable news), but felt that there was no unity or common mission. It was then that I met a like-minded group of fellow Special Operations Veterans, from both the Army and Navy.

Like me, they were volunteering 100% of their free time to rescue Afghan high-valued targets and Afghan soldiers and their families. This group of distinguished veterans came together to form Project Exodus Relief. I was immediately humbled by their backgrounds and that of their spouses and friends that supported the effort to rescue US Citizens and their families trapped in Afghanistan, Afghan SOFs, and high-value targeted families.

Before I knew it, Project Exodus Relief (PER) was formed. At rapid speed and again on a purely volunteer basis, we had our own logo, website, social media, etc. My immediate contribution beyond my expertise in Afghanistan, was to provide: a path to fundraise; capture donations; distribute funds for flights, visas; and funds for basic needs of our Afghan families (food, water, clothing, housing, etc.)

Fortunately, my greatest concern was the handling of donated money. But this was uncomplicated by Exodus’ alignment with an established humanitarian organization, Refugee Relief International. Members of Exodus began to meet every night via online media to coordinate efforts and share information.

Everyone seemed to gravitate to some contributing role without much direction. Some were the spokespeople to the media, others, intelligence of the ground situation in Afghanistan, others built built databases of our Afghans that was a huge necessary to gain support from Department of State, others managing humanitarian efforts, fundraising, fund distribution, etc.

Our leadership is unequaled

We were fortunate in being led by a selfless and highly decorated former US Army Ranger, David Michael Edwards. No one in the group even questioned that Mike should lead Exodus; it just happened. All of these efforts were maintained voluntarily while working daytime jobs and raising families of their own.

I was so impressed by the selfless and unending focus of the group that I found myself scrambling at times to keep up with the group’s efforts. By January 2022, we were able to get all our USA citizens and their families out of Afghanistan on very infrequent flights.

Even the seats on those flights were highly competed for by other Afghan rescue groups and the infrequent flights and available seats seemed to pop up and fade away as quickly as they materialized.

The obstacles and corruption continued

Requests by individuals and humanitarian groups to Exodus to take on their “Afghan people” grew exponentially when word got out of our successes and professionalism. We rarely, if ever, denied a request for assistance, unless it meant breaking the law or the cost was prohibitive. But we could only do so much and could possibly add every Afghan to our roster.

The complexity of the situation multiplied. Every Afghan we potentially took on had to be screened by Exodus against the FBI watch list, monies had to be distributed carefully to avoid the Taliban getting any of our fund, airplane costs were rising as profiteers began to extort money for planes ($750,000 for a 350-seat plane flight to a safe country or $18,000 for an individual seat).

Our number of Afghans grew overnight. I personally went from 19 to 73 Afghans looking for assistance and rescue. Exodus numbers went from 800 Special Operations Forces (SOFs) to 1800 (3000 including their immediate families).

The rescue flights from the US were (and still are) unreliable

But we prevailed, flights scheduled by US State Department were manifested but were cancelled at the last minute. Or, for some unexpected reason, our people were bumped from their seat on a plane flight out after being assured they were manifested. We also lobbied into Department of Defense and Department of State for special visas for our SOFs but to no avail.

It fell on the US Government Department’s deaf ears.

During the early months of 2022, winter set in in Afghanistan and we found ourselves scrambling to raise money, feed our people, keep them secure in safe houses in various Afghanistan cities. Meanwhile the Taliban increased their efforts to both “hunt to kill “ or try and recruit our Special Operations Forces (SOFs).

We increased our communications with them and funneled any monies we could to feed their families and keep them loyal to the USA.

One year has gone by…

This trend continues one year later. With a handful of generous individuals, and various charities, a celebrity singer songwriter, John Ondrasik, (Song: Blood on my Hands), contributing to our efforts, the Exodus team maintains its focus on helping those still trapped in Afghanistan.

As I reflect on the last year, I have that heavy heart that my original 19 high valued targets and our SOFs and their families are still trapped under Taliban torture and rule in Afghanistan. But I will continue to try and rescue as many as possible and at the same time, not disappoint, the fine men and women I work with at Project Exodus Relief. In short, I will soldier on until my mission is complete.