Americans Are Still Trapped In Afghanistan 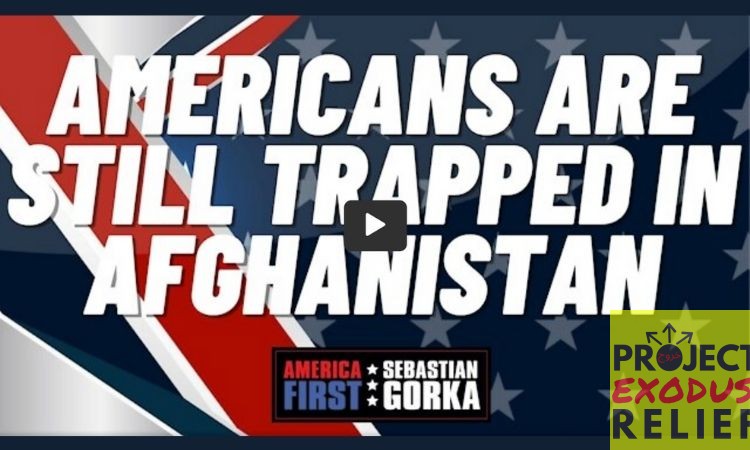 Founder of Project Exodus Relief, Mike Edwards, joins Sebastian Gorka in his program, America First, for a discussion of the current Afghanistan disaster. Project Exodus Relief is a group of retired veterans, SOF (Special Operations Forces) guys, contractors and many other capable patriots to help rescue those that are most at risk in Afghanistan. “We experience different hurdles for the different groups that we are trying to rescue.”

Our efforts have hit some walls, but our biggest struggles are getting funding and manifesting people on flights that the government are running. Through our network, we have managed to rescue around one thousand lives. By this, we mean that we have helped them fly out, but that is not the full capacity of what we are doing on the ground.

We know that Winter is fast-approaching, so we are also working hard on helping those still in Afghanistan to be fed and have somewhere to stay. We make sure that those who need to be moved to safety are helped expeditiously. Our team is one-of-a-kind, generous with their time and very capable in what they do. Watch the full interview below:

Americans Are Still Trapped In Afghanistan

Would you like to be a part of something bigger than yourself and make a difference in people’s lives? Consider giving to our worthy cause. We are rescuing people from the terror reign of the Taliban. We are keeping people safe. Our efforts also go to keeping people fed, warm and healthy, especially as the Winter months are approaching. We are 100% a volunteer effort, so all funds go directly toward aid on the ground and air rescue efforts. Thank you for your generosity!

Stay up to date with all that Project Exodus Relief is up to in the News, be it on television, radio, podcast and more! Click HERE or the image below: